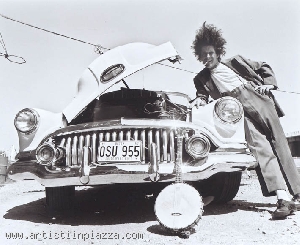 The Beast of British Comedy

For a long time Chris Lynam has been one of the better kept secrets on the circuit not know for its ability to keep 'schtum'. A man of outrageous natural comic talent, Lynam has had to sit back and watch his contemporaries - the comic strippers and the rest - grab all the headlines and the glory while he has plied his trade on the streets and smaller clubs. The signs are there that Chris Lynam is about to become a, er .... big noise.
Show:
Country: United Kingdom
Genre: Comic theatre, Clown
Email: chrislynam@skymarket.org,
Url: www.chrislynam.net