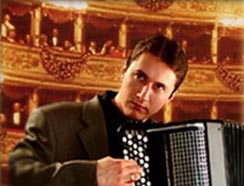 Pavel Runov was born on July 12, 1976 in Ukraine in city Uzhgorod (Zakarpatje) in family, where music was the integral part of life. His father has finished the Lvov Academy of music on a class push-button akkordion, therefore small Pavel from childhood joined magic sounds of this tool.

When he was seven (1983) he entered music school and successfully learns musical theory and art of performance. Being the schoolboy of 6-th class, he takes part in regional competition among musical schools and occupies the second place. But it does not please the young musician, and then he decides to become the first, to become the best, and begins a serious preparation for entering musical college (in 1991).

Being the student of 4-th year of college (1995), he takes part in All-Ukrainian competition of akkordionists, which took place in city of Cherson and won the 1 premium among 45 applicants. And thus he attracts attention of many outstanding musicians both performers and teachers. He had been invited to all Musical Academies of the country. He chose to enter Donetsk Musical Academy by S.S.Prokofjev, the class of professor V.V.Vojevodin, outstanding musician of Ukraine (in 1995).

During his study in the Academy Pavel perfects performance art, working over the difficultes works by I. S. Bach, F.Liszt, A. Vivaldi, W. A. Mozart, I. Brahms, and over the original modern music for accordion by such composers, as V. Zubitskij, A. Kusjakov, S. Gubajdulina and others. Pavel continues his triumphant way and wins the first Premiums on many International and All-Ukrainian competitions:

1995 - International competition for performes on folk instruments in the city of Chmelnitsky (Ukraine);

1998 - International competition " The Cup of Krivbass " in the city Krivoj Rog (Ukraine);

2001 - International competition " The Cup of Krivbass " in the city of Krivoj Rog (Ukraine).

In 2000 Pavel successfully graduated from Academy and started his postgraduated studying and works as a pedagogist.