We got the blues if you want it 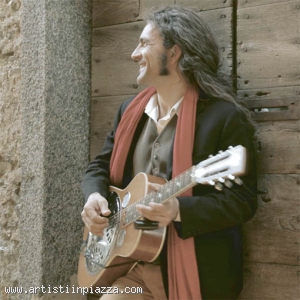 He starts as a musician and on the road artist during the time he spent in New Orleans;
on the roads of this city on the Mississippi he can "feel" the blues and Afro-American folk music
with rapture, until he manages to make it his own. His repertoire follows the tracks of the big
fathers of country blues of the Twenties and Forties: Delta and Texas blues, Ragtime, Spirituals.
Since 1996 until now he has taken part in the Festival Blues in Macallè, the Vercelli Blues Festival,
the Green Hill Blues Festival, the Tiferno Blues Festival, Blues In The Park in Gubbio, at the same
time going around and playing his music most of all in clubs in the Lake Como area and Southern Tirol
where he lives now.  He is a real "on the road" musician, as he points out himself. "The road is the
best stage for a musician." In fact he never misses the appointment with the various Buskers Festivals:
Ferrara, Schio, Bergolo, Pennabilli, Bassano del Grappa, Galway Art Festival, Huben Oztal Strassen Fest.
In 2000 he issues his first self-produced CD, called "Big Road Blues", in which with his voice and his
dobro guitar he goes in a personal way through a script written almost a century ago by the masters of
this music.  In 2004 he records "Blues an'''''''''''''''''''''''''''''''''''''''''''''''''''''''''''''''''''''''''''''''''''''''''''''''''''''''''''''''''''''''''''''''' other stories", a second recording test and the first
solo-interpretation, including original and traditional songs.  In 2005 he takes part with two original
lyrics in the realization of House of Blue Rags of the Rico Blues Combo. He opens the Delta Blues Rovigo,
together with one of the main representatives of Sacred Steel, Aubrie Ghent.  He is a member of
the program of the first gospel festival in Italy, showing the music of Sister Rosetta Tharpe,
playing with the great Mavis Staples."
Show: We got the blues if you want it
Country: Italy
Genre: Acustic blues music
Email: info@mauroferrarese.it, marco@marcopandolfi.com
Url: www.mauroferrarese.it