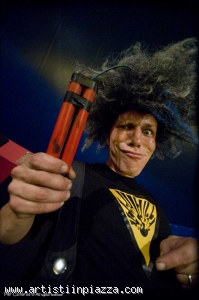 Mr. Bang, the laugh terrorist, likes things that go Bang. Mr Bang, metropolitan clown will charm you with his absurde py-romantic skills, smoke tricks and explosive comedy. Mr Bang' s mission will make you laugh in the face of fear and make it disappear! Benjamin Delmas, artist born in Paris in the 77s and grown up in Devon ( England). Since the 2003, he lives in Turin (Italy). His career starts from the streets, performing around all the globe. Actually He is collaborating with The Teatro della Caduta and The Action Theatre in Turin. He has won several competitions as best street show and innovative character: one of them, Cantieri di Strada 2006 promoted by FNAS and the prize for The Valorizzazione delle espressioni artistiche di strada della Regione Piemonte (2005). He diplomated at the Performing Arts University of Turin by Philip Radice and at the Flic. SUITABLE FOR: ALL
Show: Mr Bang
Country: France
Genre: eccentric clown
Email: info@ahahah.net,
Url: www.ahahah.net