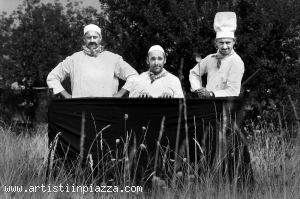 The master chef Alfredo and his two helpers Bill and Carl are a trio of nomadic cooks. They stride into town and install the kitchen they carry on their backs. All the necessary preparations are made to grab the local population by the taste buds. Culinary skill is flawlessly mixed with musical rhythms and comic play. The preparation of an omelet becomes a sacred ritual. An ode to the essence of life. Victual Vitae! Mucho Fructus! Viva Vivir! Cook on! In Cook it The Primitives achieve a subtle balance between cooking, music and visual humor. A performance that In it's simplicity has surprised and satisfied audiences the world over.
Show: Cook it
Country: Belgium
Genre: Street theatre
Email: a.greder@gmail.com,
Url: www.thebridgeproductions.net