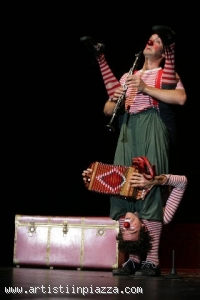 The company I CIRCONDATI was created in July 2009. After working together for about 3 years respectively as teacher and student, Luciano Menotta and Diego carletti became colleagues, and decided to undertake an exhaustive study of the clown art applied to live music. They made their debut at the Milan Clown Festival 2010, where they met with great success with the audience and the professionals. Keeping working at the development of their show, they started their first tour which brought them to several italian and european festivals. They were chosen among the off groups at the 25° Festival de Teatre de rue D’Aurillac with the show “TRI QUATER”, which was a great success with the french audience. In March 2011 they won the jury award at the Milan Clown Festival with the show “TRI QUATER”. “TRI QUATER” is a show where two clowns with their two musical instruments, a clarinet and a barrel organ, start off a concert which can't find a 'comfortable position'. Two clowns'a' l'ancienne' with no words, who found their ideal language: music, acrobalance, juggling, beat-box, pantomime, an old trunk and a centuries-old gramophone are the toys you'll see them playing with... Their 'idiocy' is enlightened, a continuous degeneracy and transforming into something new and funnier, an endless game without rules, which can find its conclusion just in the lines of a poem. SUITABLE FOR: ALL
Show: Tri Quater
Country: Italy
Genre: Clown
Email: icircondati@libero.it,
Url: www.icircondati.it