From Nassau to Memphis 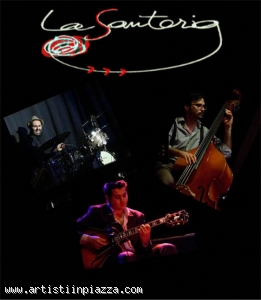 The scene of the Afro-American music between the end of 1800 and the first decades of 1900 is one of the most peculiar and interesting periods for popular music, whose features will mark permanently the following and deriving styles. This varied and apparently fragmented world was a melting pot of sounds, where mutual influences could coexist and often melt into what was called black music. 'Santeria' is a pejorative term used by the Europeans to describe the overworshipping of Christian saints by Afro-American people, who actually thus concealed their faith for animistic deities. The group's music is influenced by these different sources of inspiration. They aim at following the main theme of music styles which are different though related, as when there were no record labels and therefore no genre distinctions. The line-up, composed of double bass, drum, guitar and voice, is intentionally minimalist, with the purpose of keeping the groove central, instead of the accessories. "La Santeria" was born in 2009 from previous music experiences. The band and its musicians took part in several festivals and events, such as Castel San Pietro Blues Festival, Tiferno Blues Festival, Green Hills Blues Festival. Claudio Olivieri: guitar, dobro, ukulele, lap steel Francesco Pesaresi: double bass Paolo Angelini: percussions SUITABLE FOR: ALL
Show: From Nassau to Memphis
Country: Italy
Genre:
Email: lasanteria@libero.it,
Url: www.myspace.com/lasanteriabanda