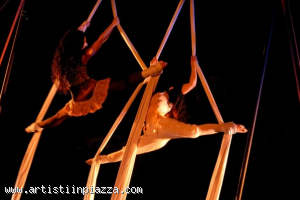 Viola and Sofia are the main characters of this play. We meet them on the verge to pass away... we found them sleeping “neighbors”. We start to see things under a new perspective. What happens inside the cemetery walls when the last visitor leaves the scene, when the cemetery caretaker locks the gate? Cries, chains, restless souls, will-of-the wisps? Nothing of the sort, just a boring night, that bring Sofia to get out in search of more appealing entertainment than reading the same dusty old book she has been reading for over a century. On the contrary, Viola has been sleeping her untroubled sleep for a century when Sofia abruptly wakes her up. Bewildered at first, the ladies get to know each other, get stuck after such a long immobility, then start to remember the passions of their lives and dance with their undisputed and immortal landlady. Overhanging rigs become unusual points of view to continue their narration, fire is used with astonishing nonchalance since...what’s the risk for two dead bodies? The routine of the gruesome setting is interrupted by whispers and voices...a suspect...is anybody down there? Yes, it is you, unexpected audience, you are materializing in front of the incredulous eyes of the two, who have not seen such a crowd since the day of the last funeral! LE BACCANTI (The Bachantes) have won the award from Regione Piemonte in 2004 for their capability to emphasize street art ex
Show: Nomen Omen
Country: Italy
Genre: ,
Email: info@le-baccanti.com,
Url: www.le-baccanti.com