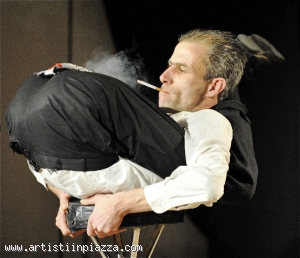 EXTRA - Peter Weyel has been street-performing for over 20 years all around Europe buskers festivals. Apparently in a very bad mood, Peter Weyel presents an explosive and spectacular show. The chemistry that establishes between Peter and the public develops into an overwhelming performance, in which dramatic and hilarious tricks follow one another in unexpected ways. A broken dish, a trained tiger and trendy underwear: the audience can't help but wonder whether Peter is crazy or a genius. This is not an ordinary show, that's for sure! But this show has always been topic of discussion in every festival, where it gets enthusiastic response. Peter Weyel's show has been awarded many prizes: 1° prize at the Augsburg Festival "La strada", 1° prize at the "Bamberger Händchen" festival, 1° prize at the "Gaffenberg" Festival in Heilbronn (comedy section), 1° prize at the "Gießener Schwätzer" festival, 1° prize "Lingener Theo" (2010). SUITABLE FOR: ALL.
Show: Regalare gioia
Country: Germany
Genre: Comico
Email: peter.weyel@freenet.de,
Url: www.peterweyel.de