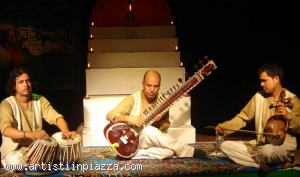 Formed in 1997, Sukarma is Nepal's most sought-after folk-classical outfit comprised of three talented instrumentalists. The commonality among the instrumentalists of this musical group is that they belong to the illustrious gharana (home) of music who have been playing for generations. Sukarma, as the word refers to as "good deeds" upholds a two-fold philosophy. Firstly, the musicians devote themselves to the music by celebrating it as a symbol of their Sukarma. And secondly, they endeavour to instill the classical music in the young generations by playing ragas and indigenous folk music. However, the group remaining faithful to the spirit of music is always keen and open to innovation and experimentations. Sukarma has been awarded with coveted Kalashree Samman by Dr. Ram Baran Yadav, President of the Republic of Nepal in February 2010 and the over ten audio and visual CDs to its credit. The group is also Goodwill Ambassador of Nepal Tourism Year 2011. Members of Sukarma Dr Dhrubesh Chandra Regmi (Sitar): Dhrubesh is a rare exponent of sitar belonging to the illustrious musical family of Nepal. His great grandfather Dev C Regmi is credited for pioneering sitar in Nepal. As a toddler Dhrubesh would listen to the music played by his grandfather and father Prof Satish C Regmi. Under the tutelage of his father he honed his skills as he grew up and subsequently joined the music school, such as, Gandharva Mahavidhyalaya in India and subsequently in Delhi University. Dhrubesh became the first musician to hold PhD degree in music in Nepal. Dhrubesh an Associate Professor at Tribhuvan University is now a respected name in the genre of Nepal's folk-classical music. He is also a recipient of various prestigious awards and prizes, such as, First Prize in Radio Nepal's Classical Music Competition (1989), Kiranteshwor Sangeetashram Award (2002), Swar Sangam Youth Sangeet Award (2004) to name a few. Shyam Nepali (Sarangi): A toddler Shyam would sleep on the laps of Magar Gaine-- his grandfather-- when the latter evoked mesmerizing tunes from the sarangi. Like his grandfather Magar, his father Ramsharan Nepali was a big name in the folk vista of Nepal. Shyam is the most sought-after sarangi--the quintessential Nepali violin-- player in Nepal today. He is not only known for his uncanny style of creating sounds but also credited for modernizing and improvising sarangi. Shyam teaches sarangi at Nepal Music School at Pingalasthan, Kathmandu. Pramod Upadhyaya (Tabla/Percussion): Pramod too learnt tabla at home from his father Pundit Hom Nath Upadhyaya. Pramod holds Senior Diploma from Prayag Sangeet in Allahabad in India. He had also an opportunity to learn tabla from legendary Ustad Alla Rakha from an institute named after the Ustad himself in Bombay, India. Incidentally, Pramod also had an opportunity to learn from Ustad Zakir Hussain for three months as the maestro happened to be a visiting faculty at the institute. Pramod is adept in all percussions made of leather. Besides that, he has worked as a recordist in many studios in Nepal. But, his fame is not confined as a musician or a recordist either; he has also lent his voice to many popular songs. SUITABLE FOR: ALL
Show: Music from Mountain
Country: Nepal
Genre:
Email: sukarma@wlink.com.np, regmiidhrubesh@hotmail.com
Url: www.sukarmamusic.com