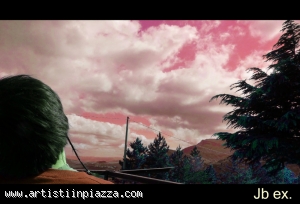 EXTRA- Born in 1980 in a small mountain village in central Italy, Jb, in the world Francesco Pignatelli, started plucking the guitar at the age of 13. Since then, year after year he's come closer to many more instruments, thus becoming a very talented multi-instrumentalist. After writing rock, blues and grunge songs for a while, at the age of 20 he got struck by funk and hip-hop rhythmic; he undertook a new artistic path and started playing with groups such as "John, Hed & Nik" and "Sound Inc.". At the beginning of 2011 he felt the urge to produce a soloist album. That's how "The world in my pocket" came out: a work dedicated to his childhood places. Nature is the main topic of this work in which crepuscular melodies mix with funky/jazz rhythm: a trip to take with shut eyes. Afterwards Marco "Nik" (bass) and Andrea "Tino" (percussion) joined this soloist project. The group's name is now "Jb ex", and it resumes the musical path undertaken by Jb with "The world in my pocket". The trio rearranges the songs of the album and other famous songs in a funk/hip-hop style, with an original sound. The group is composed of: Jb, voice, guitar, bass drum and foot-drum; Marco "Nik" bass and double bass, Andrea "Tino" percussion. SUITABLE FOR: ALL