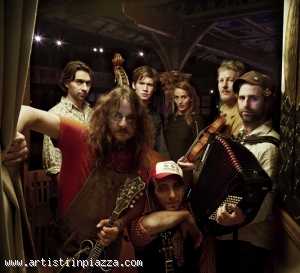 Kidnap Alice are a London-based band who mix up bluegrass and Appalachian old time with blues, folk and original material. With soulful vocals and tight arrangements from a classic acoustic stringband line up, the band bridge the gap between vintage R’n’B and Appalachian mountain music. Kidnap Alice had their debut festival performance at Glastonbury Festival 2010, opening the Club DaDa stage in Shangri La for Global Local. The band went on to perform at many other festivals including LoveBox, Secret Garden Party, Bestival and the Big Chill, gathering a firm following along the way. In 2011 the band continued on the roll with 2 rural tours, gigs across the capital including the Shakespeare's Globe and the National Theatre, and performances at over 20 summer festivals - both mainstream and on the folk and bluegrass circuit – winning fans and enchanting audiences at all, and proving a cross-over success. SUITABLE: FOR ALL
Show: Kidnap Alice
Country: England
Genre: live accoustic bluegrass and folk music
Email: ,
Url: www.kidnapalice.com