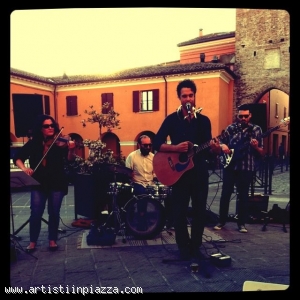 EXTRA- Richard Amadei is a songwriter who uses Rimini share his existential anxieties "Les pastis", a handful of musicians from the slums, the Italian American bass Albert Marini, Master Helen Partisani the violins, and the Marseillaise of mind Paul Angelini on drums and cymbals. The repertoire offers previously unreleased tracks from the dust of Mexico, garbino wind, whistling bullets, station masters, nightclubs and other characters. Compositions are found in the atmospheres clearly the influences of the best Italian songwriters and arias from Parisian bistros. The lyrics and arrangements are lean and simple, light and shade in a folk flavor where the word, always on top, describes humanity passionate and mestizo, balanced precariously and disenchanted. Richard Amadei collaborates with the theater world, and won the prize in 2005 "Festival of the Arts" for the soundtrack of the show "Water" company "Mercury Theatre" in Bologna. Along with Les Pastis wanders festivals, pubs and places more or less listening to deputies, bringing with stray euphoria their music for all ages. In July 2012 will be released first album, they already started recording. SUITABLE: FOR ALL
Show: Mai più ostaggi
Country: Italy
Genre:
Email: pabloangelini@libero.it,
Url: www.myspace.com/richi_pastis