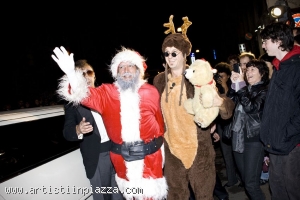 He is a saint He is an old man He is like a God He is wise He is a superhero He is a commercial He is the absolute symbol of consumerism He a divinity in the Olympus of Collective Imagination But, at the same time,he is a childhood dream – pre-packaged depressing and vulgarly exploited. Discovering that Santa Claus does not exist means for a child to discover that he is growing up, and that is not so cool. It is no doubt one of the first disappointments in life, the first time your world falls apart, the end of poetry, the death of a fairytale, a fundamental step to be part of a society founded on nothing. But how does Santa Claus himself feel about it? What does he really think about his job, his mission? Does he believe in himself? In his work? And what about the controversial relationship with the reindeer? What does Santa Claus do when it is not Christmas? Does he get depressed? Or does he celebrate on a Caribbean beach? Maybe no-one recognizes him out of season... Maybe a life like many others.Therefore, Santa Claus does exist... but he has decided to commit suicide. We will help, giving him a beautiful death. SUITABLE: FOR ADULTS (OVER 14 YEARS)
Show: XMAS FOREVER, la morte di babbo Natale
Country: Italy
Genre: Theatre
Email: organizzazione@tonycliftoncircus.com,
Url: WWW.TONYCLIFTONCIRCUS.COM