Leo Bassi the best of 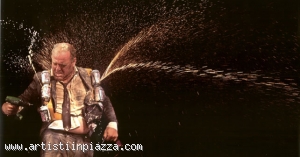 Famous all over the world for his provocative and extravagant theatrical performances, Leo Bassi is a comedian and an artist who descend from a long line of Italian, French and English circus. For over 130 years, the Bass family has performed without interruption all over the world. Six generations ago, an ancestor of Leo Bassi, created one of the first modern circus in Tuscany. Then, during the period of Vaudeville, a British grandfather of Leo, Jimmy Wheeler, has regularly performed at the London Palladium and was a pioneer of TV. More recently, his father, a world renowned juggler, worked in the United States together with important artists and entertainers such as Groucho Marx, Louis Armstrong and Ed Sullivan. From his family he has inherited all the tricks of his work and the most original circus skills such as juggling with feet (thanks to his ability he is mentioned in the Oxford Encyclopedia of Performing Arts), but rather than continuing a tradition of theatrical tradition, his aim is to keep alive in today's reality, the deranged and provocative spirit which is the true “trade-mark” of the Bass family. According to Leo, “entertainment” is not only to entertain the audience: the aim of each performance is to create in the audience a unique and exciting experience, an exceptional, unique and magic moment of life. This is the aim of Leo Bassi: without magic a show is just a… show. Leo has always kept a passion for particular atmospheres, even outrageous, in order to surprise his audience. Over the years, Leo enjoyed to create confusion in the Italian Air Force, the German civil defense, the Dutch and Swiss fire brigade, he pulled a cake in the face to the major of Montreal, performed a circus show with 22 bulldozers in Barcelona and has been arrested 11 times in Paris. SUITABLE: FOR OVER 16 YARS
Show: Leo Bassi the best of
Country: Spain
Genre: Philosopher clown
Email: bassi@leobassi.com,
Url: www.leobassi.com