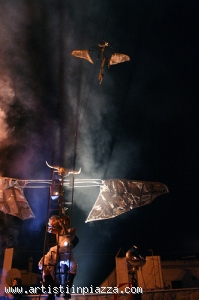 “We are the stuff that dreams are made of“, and Maestro Rotella’s dream is to fly. The desire to fly under one’s own steam which motivated Leonardo da Vinci, Icarus and many other less famous people inspired the performance. A melancholic Miss Radomski introduces the audience to the weird maestro Rotella and his improbable museum, which is inhabited by ferrous creatures and aerial flying machines, that are incapable of taking off. It’s not a question of getting quickly from one place to another, but to do so through the same stuff as dreams. And Rotella’s flying machines aare made of pieces which seem “to imbue the cold gears and the inert mechanisms with a spiritual force which breathes life into them”. The audience is introduced to his inventions: the Suonolucisauro (Soundlightsaurus), the gleaming Ferricottero (Rustingo), Sensazione di Volo (Feeling of Flight), the impeccable Cerimoniere (Master of Ceremonies), and Aggiavulà. The performance interprets a reflection on the effects of progress on mankind: the encounter cum conflict between Rotella, who blindly believes in the most abstruse forms of progress and Margareta Radomski, his assistant who having experienced the consequences of an ecological disaster, opposes her experience to Rotella’s blindness. A dreamlike visit to an unusual museum of flying machines during which Rotella and Radomski guide the audience in discovering the various secrets of flight and imagination. SUITABLE: FOR ALL
Show: Lassù le ali non hanno ruggine (Up there wings don't rust)
Country: Italy
Genre: open air theatre - multidisciplinary performance with theatrical machines made of recycled materials
Email: m.kramers@theatrenvol.org,
Url: www.theatrenvol.org