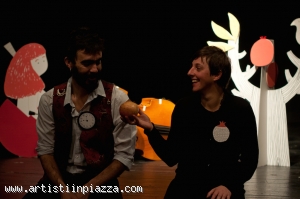 A show to rediscover the value of the oral tradition of Italian tale, through acting, music and illustrations.. A show where the images evoked by words encounter a world of sounds. The voices, the contrabass, the loop station united with one of the most beautiful fairy tales, collected by Italo Calvino in a monumental and essential work, not only for children but also for their parents. The illustrations of Letizia Iannaccone, become a stage to act, with elements that appear, disappear and change following the story. An interactive show where children are involved before the final act to summarize the story and sing a song...the fairy tale becomes a collective ritual. The goal is to train the imagination and create a place of encounter, exchange and growth through the fairy tale and its archetypal form. SUItABLE FOR: ALL (from 3 years)
Show: L'amore delle tre melagrana
Country: Italy
Genre:
Email: elisa.dand@gmail.com,
Url: