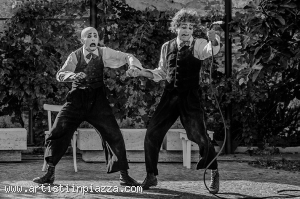 Two strange men in tails, white and dusty, arrive on the scene. They seem lost, surprised or perhaps afraid begin the show: "Ladies and gentlemen our history stars from very far". A show between comedy and tragedy, melancholy and euphoria, characters plays with fantasy and reality and the illusion is confused with the truth. In a rarefied and dreamlike atmosphere a classic comic acts, often based on confrontation and a joke, are played in the dynamic torque. And again numbers mimic supported by the music and numbers illusionism naively intended to reveal their tricks. SUITABLE FOR: ALL (from 5 years)
Show: Attento si scivola
Country: Italy
Genre: Mime, pantomime and clowning
Email: anna.giuriola@gmail.com,
Url: www.ifratellicaproni.it/