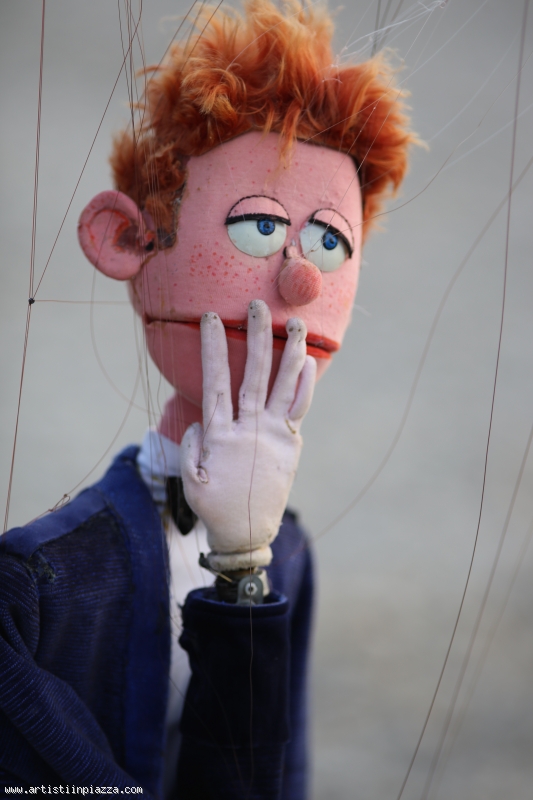 Alex Mihajlovski was born in Macedonia, and has resided in Denmark since 1992. He began designing and constructing a puppet in Spain in 1986. The result is Barti, a marionette with an extremely complex system of string control, which is constantly maintained and developed. With more than 40 very fine and mostly invisible strings, Alex enables Barti to move his body, face features, fingers, and express emotions in a unique way. The first performance with puppet Barti was in 1988. There were only 9 strings then. Every year since then, new string is added and new movements controlled by the new strings are invented.
Traveling mostly in Europe ever since, he discovered the vast world of puppetry, and the culture behind it.
He then created a variety version of his performance, and named the show as  the "Alex Barti show". The puzzling and intriguing comedy numbers created by Mr.Mihailovski in the Barti show, are based on a theatre-pantomime, where the story and comedy is expressed in movement, mime and music. As a marionette show without any speech, Alex Barti Show is rare in the puppet world.
The virtuosity of the puppet-master Alex Mihajlovski, as a symbiosis between figure and showman, enables the viewer to cross a border between reality and fiction. Barti the marionette, is almost alive!
SUITABLE FOR ALL