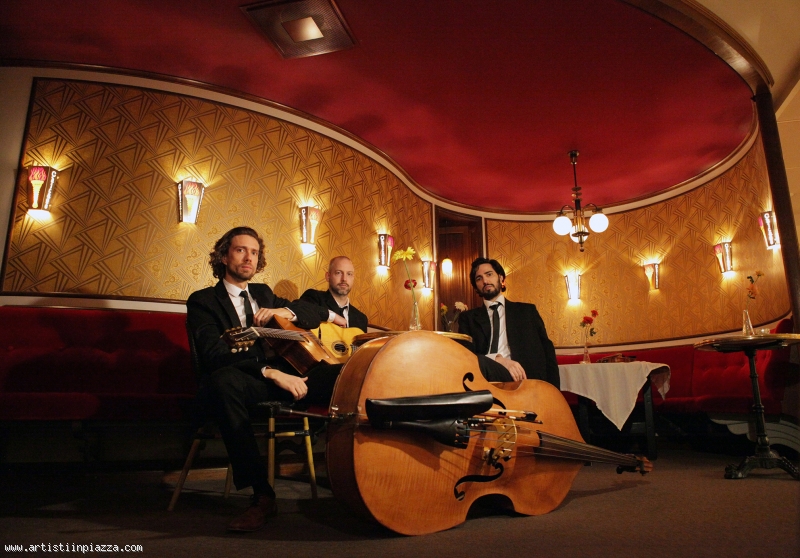 With: Gustav Lundgren - Guitar (Sweden); Martin Widlund - Guitar (Sweden); Juan P Mendoza - Bass (Argentina).
Gustav Lundgren Trio was founded in 2011 in Stockholm.
Gustav is known both in Sweden and abroad to be one of the world's foremost interpreters of guitarist Django Reinhardt.
Now, after a number of CD releases and constant touring with everyone from Anne Sofie von Otter and September to Jimmy Rosenberg & Jorge Rossy, Gustav Lundgren settles down with his trio in a delightful mix of music from all over the world . They perform Django tunes and original material interspersed with compositions from Cuba, Brazil, Turkey, Venezuela, Norway, France, USA, Portugal and Spain. This is world music performed by a classical Gypsy Jazz Trio!
The latest album "Bertheléville" demonstrates the group's musical veriety.

Gustav Lundgren is one of Sweden's most prominent jazz guitarists right now. He was born in Stockholm 1980, started to play guitar at age 12. He studied music in Stockholm, Bollnäs and Svalöv between 1996-2000. Gustav started to play at clubs around Stockholm at age 16 and made his first tour to Spain with his own trio at age 19. Between 2000-2012 Gustav toured Japan, USA, Indonesia, England, Brazil, France, Syria, Turkey, Scotland, Slovakia, Spain, Italy, Algeria, Latvia, Switzerland, Austria, Moldova, Ukraine, Transnistria, Germany, Sweden, Denmark, Norway & Finland with different jazz groups. He has recorded over 55 albums as a side man and 15 as a leader. Gustav Lundgren has been working with names like: Jimmy Rosenberg, Jorge Rossy, Doug Weiss, Antoine Boyer, Lelo Nika, Dorado Schmitt, The Swedish House Mafia, Kleerup, September & Anne Sofie von Otter.
Gustav Lundgren is well known within Jazz, Gypsy Swing and House. He has also composed & recorded music for TV commercials (MTV, TV4) and produced albums for artists like Jelena Jakubovitch, Lili Araujo, Celia Mur and Hot Club de Suede. Gustav has performed in both TV and Radio in many different countries including the USA.
In 2004 Gustav was honored with his own signature guitar model from AJL-Guitars.
In 2005 he received the Louis Armstrong Scholarship.
In 2009, 2011, 2013, 2014 & 2016 he was honored with grants from The Swedish Arts Grants Committee.
In 2015 he received the Albin Hagström Scholarship and the Second Line Jazzband Scholarship.
SUITABLE FOR ALL