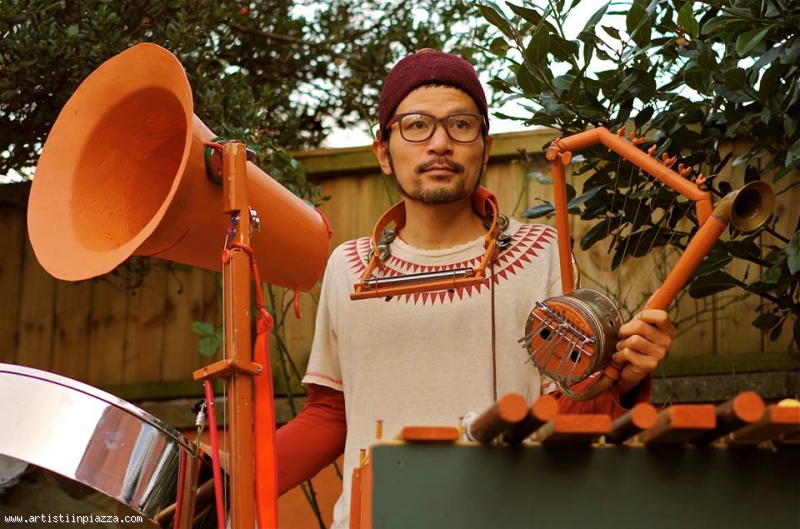 Ichi, from Nagoya in Japan, takes the notion of a one-man band to new limits, combining his quirky handmade instrument inventions (stilt-bass, kalilaphone, balloon-pipes, hatbox-pedal-drum, tapumpet, percussion-shoes & hat-trick-hat) with steel-drum, ping-pong balls, toys and everyday objects all in the space of one short set.
Somehow there's an ancient, ritualistic feel to his performances – he's like the misplaced leader of a tribe.
To see Ichi live is to witness something so playful and unusual you know that you're experiencing something entirely new.

Having toured as a solo artist in Japan, the UK and Europe, playing at festivals including Greenman, End of the Road, Boomtown, In The Woods, Great Escape, Camp Bestival and Glastonbury, Ichi has been making waves and it's unsurprising he is championed by the likes of David Byrne, BBC 6's Steve Lamacq, Gideon Coe, Tom Ravenscroft, Lauren Laverne, and Deerhoof who invited him to play with them in New York at their event The Wordless Music Series.
Ichi’s simple concepts and playful presentation have universal appeal and his new single Go Gambo has been receiving much airplay on Radio 1, BBC6music, XFM, Amazing Radio and Resonance FM and his video has quickly racked up 7000+ views.
Ichi is also a film-maker, infact you can usually see him with a cine camera in his hand, or his hands rooting through Bristol skips for materials for his musical and sculptural inventions, or his hands in the earth making human sized interactive earth xylophones.
SUITABLE FOR ALL