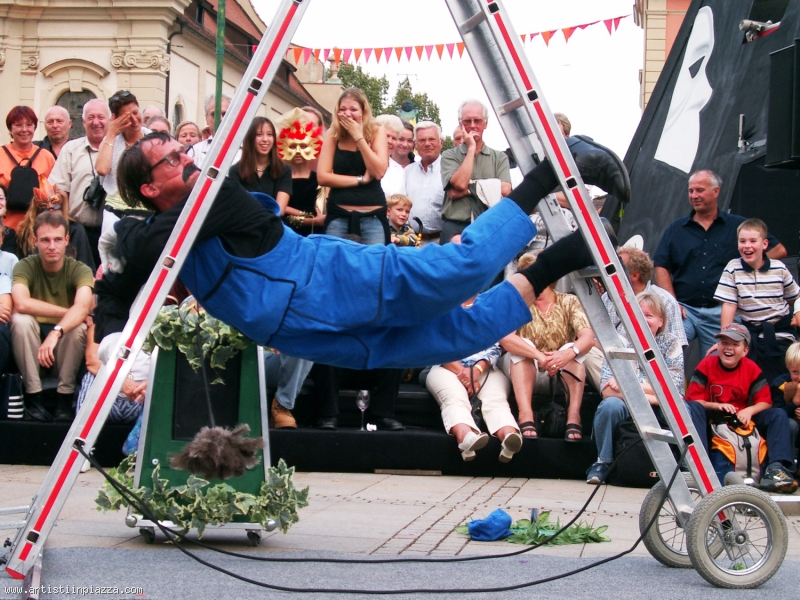 Nakupelle company was born in 1992, with the goal of creating original work based on popular theatre forms - circus, slapstick, clown, mime, mask and commedia dell'arte. Nakupelle designs masks and puppets for theatre companies around the world. They have designed everything from full-face character to half-face commedia masks, parade puppets to shadow puppets. They have also designed sets and props for various companies with an emphasis on portability, durability and strong visual impact. Company member Joe Dieffenbacher is a world-reknowned teacher and director of physical theatre, clown, circus, and commedia dell'arte. He has collaborated with companies to create intimate performances as well as large scale spectacles. He has collaborated with such companies as the Belfast Community Circus, Los Payasos Mendigos, the British pop sensations, Take That, and was also featured in the 2012 London Olympics. He was the Director of Clown Conservatory at the Circus Center in San Francisco, California and Physical Comedy Director at Shakespeare’s Globe Theatre in London.
The Trap features Joe Dieffenbacher, a former circus clown and elephant jumper. His solo shows have been featured at top festivals in all over Europe and the UK, Luxembourg, Ireland, South Korea, Sweden, Japan, Finland, New Zealand, the USA and Canada.
SUITABLE FOR ALL