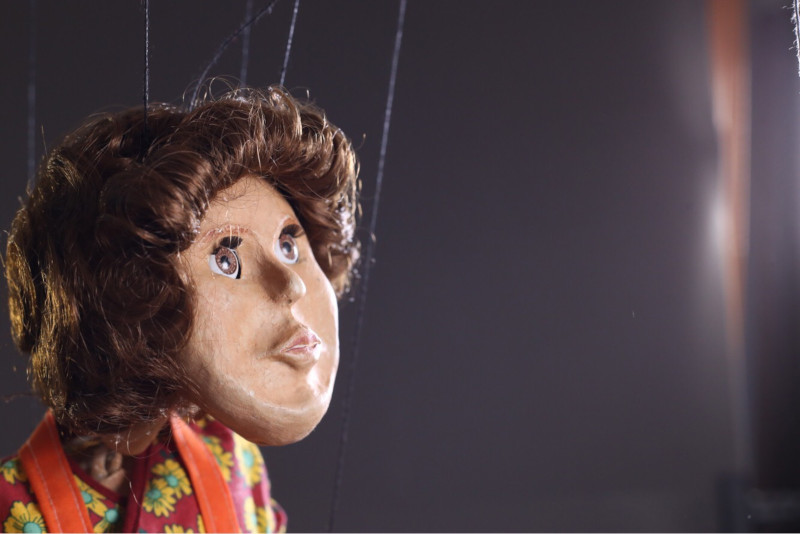 Seven puppets, through the manipulation of the actor-puppeteer, give life to a succession of stories and situations that are always different, poetic and surreal. A show full of poetry, naive as genuine, delicate and intimate.

The company "Di Filippo Marionette" was founded by Remo Di Filippo and Rhoda Lopez.
Graduated in the history of theater at the University of Bologna Di Filippo is trained as an actor, studying the commedia dell'arte, the neutral mask, the mask larvaria, pantomime, voice and movement. He works as an actor in various Italian companies, and in 2010 he approached the world of puppetry, thanks to the discovery of a small and fascinating workshop in the center of Barcelona: "Casa taller de marionetas de Pepe Otal". In this theater-laboratory, he discovers the nobility of wood, and its infinite faces, and rediscovers the threads that bind him to his childhood.

Rhoda Lopez, born in the Philippines and raised in Zambia, lived in Perth in Australia until she met Di Filippo. Rhoda's love for the arts derives from her culture and from an innate desire to communicate. Graduated in Musical Theater, she has worked in many theatrical productions as an actress, singer, dancer and presenter. She has been awarded as best actress and has also worked on the small screen in movies and various Australian TV series.

The marionettes they use are built by them in a small workshop based in Offida, a town in the province of Ascoli Piceno. The company has performed in festivals, theaters and schools in 16 countries: Argentina, Australia, Austria, Belgium, France, Germany, Greece, Italy, Holland, Peru, Portugal, Romania, Spain, Switzerland, United States, Hungary. He also takes care of the artistic direction of the Festival Hors Lits Offida (Out of bed), and International FOF (Figure Offida Festival) in Offida.