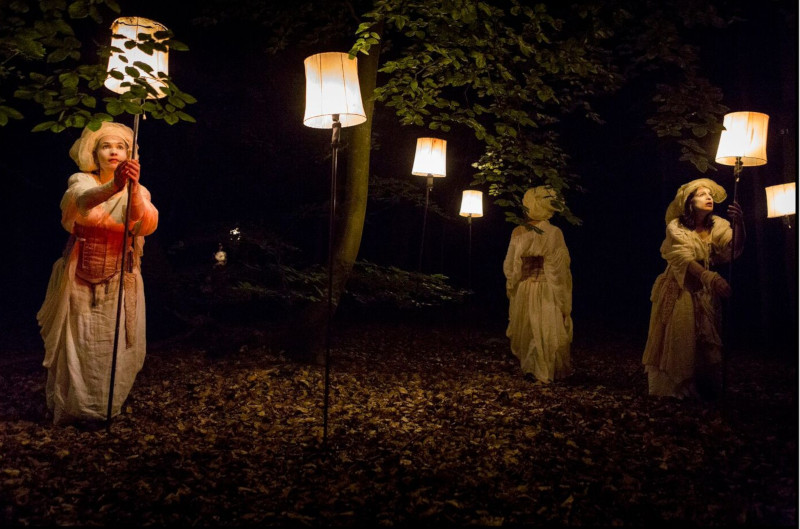 Bizangos it is an examination of crowds, their power and their movements. What lurks inside us? Are we elements that contribute to the energy of a group and make up its force? Are we passive participants carried along by its flow, contributing to the acts it commits and thereby losing all control?

This project calls into question our own individual intentions as members of a group, of a crowd, or of society. In particular situations, men, in their great majority, are capable of the worst.” Stanley Milgram Submission to authority and to group pressure can explain a great deal of amoral behavior. Through this project, we aim to explore the mechanisms of normalization, how unacceptable and unreasonable acts are accepted as routine and become commonplace. We want to uncover the roots of amoral behavior, especially through submission to authority and to mob mentality. We want to dissect methods of indoctrination, the art of manipulation, and the process that leads to collective amnesia and, eventually, self-destruction. We want to question what drives man to seek his own death and thus negate the precious humanity that lies inside us all. Why is it that whenever a group of men is assembled, the moral values of each individual are wiped away, and only the ancient, the crudest and most primitive impulses remain? “Violence is the true heart and soul of the sacred.” Rene? Girard Or might violence be intrinsic to our cultural and social order, violence as a founding and stabilizing principle? Social order and its stability have always originated in repeated acts of collective violence against a solitary victim or group of victims: the scapegoat. Through the ritual of sacrifice, any violence that threatens the community is hunted and cast outside, rather than kept inside the community and among its members. Rene? Girard puts forward the hypothesis of a morphogenetic mechanism that contributes to the emergence of cultural and social order: the mechanism of the sacrificial victim. He analyzes the relationship between sacrifice and religion, the latter being seen as a means of regulating social violence, as well as creating social cohesion. According to Girard, the function of religion is to maintain violence outside the community, by creating scapegoats, or by various rituals of substitution.

Our research focuses particularly on these substitution rituals: how collective rites and celebrations have always been emulations of the sacrificial act and, through their cathartic function, have made it possible to eradicate violence caused by rivalries and conflicts within the community; how, cyclically and in time, these rituals become impoverished and lose their cathartic function, and lead once again to uncontrolled violence. Our own analysis focuses on major events of collective exaltation, events whose purpose is to manufacture consensus within a society and bring about absolute conformity. Our research seeks out common elements found in religious ceremonies, funeral processions, military displays, carnivals, political demonstrations and ethnic ritual processions.

All these different questions have been distilled into a work of nocturnal theatre that travels through space, accompanied by 17 performers, actors and musicians. The performance moves along the edges of the city, across natural zones, and through urban areas still under construction. The piece’s structure emerges out of a detailed study of diverse forms of procession, as well as questions of music and its role in ritual, and concepts of unity and uniformity, the physical efforts required by each participant, the mystical dimension, codification and secret, rhythm and trance, links between disparate events, and symbols of architectural and natural heritage. Our work aims to create a space-time that warps the spectator’s everyday perceptions. This modification of the spectator’s state of mind is achieved through multiple dramaturgical devices, such as trance and repetition, the use of sacred chants and folk songs, the rhythm of crowd movements, and the impact of audience partici- pation. The actor-spectator relationship is constantly transformed through the interactions between different scenic spaces, variations in proximity and distance, alternating perspectives of the city, the outskirts of urban space and its status as a living scenery, immersion, and the use of spatialized sound. Bizangos takes the public on a dreamlike journey, a fantastic tale that guides them through a strange musical landscape full of unusual sounds and textures, a cathartic ritual that continually stimulates their senses.
“Theatre is not to be watched, but rather to be lived. ”

The Company Rara Woulib carries artistic researches on, drawing new forms of poetry and theater arising from intimate questioning as well as great concerns of mankind. Create rites and perform in people’s everyday life, in communal space, tying their preserved customs and our lost rites. Abord each new city or landscape as unique. Draw new urban ways, explore the city’s porosity. Haitian rara, musical trance Rara, a musical curiosity is traditionally an occasion to gather people and parade, but the magic of that music comes from its own construction. Dance and songs are bound to a percussion ensemble and wind instruments made of long metallic trumpets called klewons or kone on one side and vaksins, bamboo tubes of various sizes and tone. The vaksins remind certain vocal styles of central Africa: each musician plays a single note in a technique bearing some resemblance to hiccup, and alternation of each wind builds a melody. We chose to thoroughly explore this musical form through composition, and also through improvisation techniques. The musicians interdependence adds to the ambient fragility an keeps both actors and audience alert. Traditional Rara is closely related to procession, trance and transcendence. We remain close to this essential aspect of that art.

In Bizangos will be involved 40 people of the local choir "CCTP - Canta che ti Passa", to create a show that stages over 60 people including actors, choristers, musicians and technicians.
The work of collaboration and training with local community took place through monthly meetings held in Pennabilli starting in February, before concluding with the participation in the show Bizangos presented during this edition of the festival.

Not suitable for people with impaired mobility.
We highly recommend the audience to come with comfortable shoes for walking.