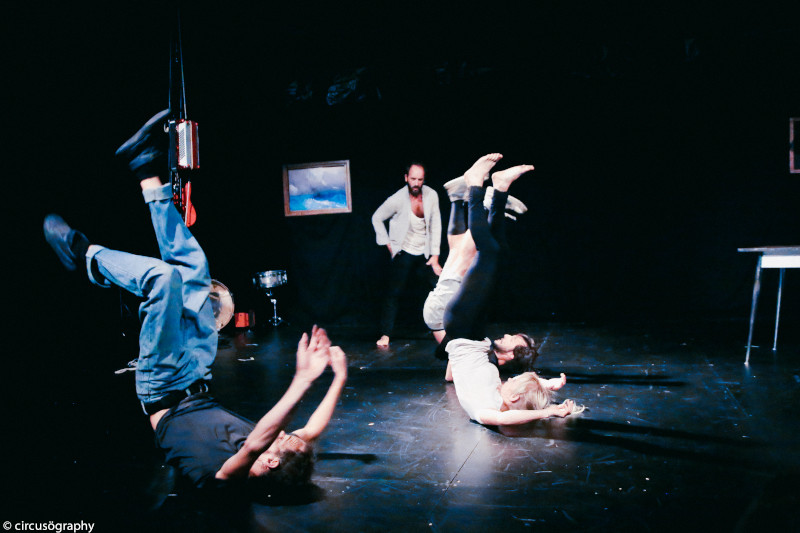 "The stakes are no longer the theater and not even the circus, but the retina, the perception. The sharp contrasts in black and white, the unbearable vibration of moods and complementary techniques, the intertwining of the physical and the mental universe. The perception, always subjective, of facts and visions is an element of our work whose task is no longer that of immersing the observer in a gentle evasion, but of stimulating him, and his eye with him.»

While the ships with their crew and equipment defy the sea, mirages, storms and whales stir the nights of some people in a port. In the expectation to set sail, dreams and nightmares like harpoons pierce their thoughts that are transformed into jumps, feats, perilous games to deceive the time. Laerte pays homage to the sea, to its majestic waves that decide which destinies to ruin. Laerte is a show that challenges the usual mechanism of show's creation and production.

Laerte is created directly on stage and inside his space advances together with his spectators utopically towards his final form. The distance that separates the actors from this goal becomes smaller and smaller as they advance in the replicas, but it will never be filled, for the same wonderful reason why a sock can always find its place in an already full suitcase.
Side is an alternative circus project, an original and intentionally independent project created by a collective of international artists with strong experience in the field of avant-garde circus show, as in the technical and musical field.

This show has a limited number of seats but without reservation, we suggest to be there 1 hour before the beginning. To access you must have a valid Festival's ticket.