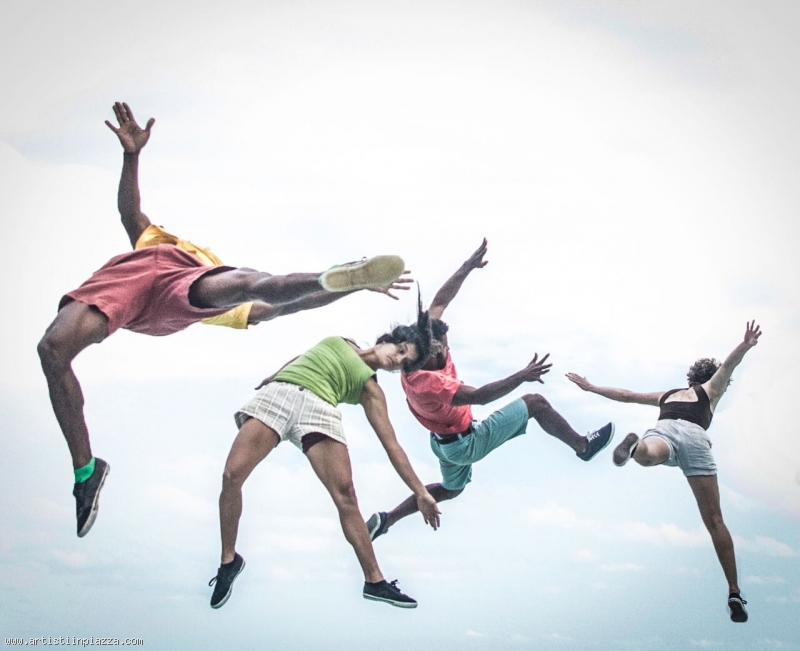 What do we take with us when we are far from home? A kind of "portable territory" full of customs, values, traditions and emotions that we carry with us wherever we go. The show mixes acrobatics, Chinese pole, acrobatic duo, dances and Brazilian musicality. It invites the public to dive into a relaxed atmosphere, where everything becomes a rhyme, that balances but does not fall, and stays firm and flexible. The show is influenced by popular Brazilian cultural manifestations such as Samba de Roda, Coco, Baião and Capoeira, among many others that were developed through the mixture of African and indigenous influences into the Brazilian territory. Their rites combine the sacred and the profane, being often linked to religious manifestations such as candomblé and umbanda, as well as inspired in the dynamics of work in sugarcane plantations, coffee plantations and livestock management, since the period of slavery. These manifestations are not restricted only to musicality, but to a range of ex

The company Cia Delà Prakà was born in 2007 in Rio de Janeiro - Brazil during an encounter of artists which were interested in deconstructing the traditional aesthetics of the circus through contemporary dance. In 2009 Ronan Lima and Marina Collares travel to Europe and create 'Entretreâmbicos', performing art festivals in France and Spain and organizing their first independent tour of social circus in Africa (Mali and Guinea Conakry). In 2011 they settle in Barcelona and realize their second creation Nois um, a show of Dance and Circus. With this work CIA has performed in more than 14 countries, and has held around 400 presentations at Street Art, Circus and Dance Festivals in Europe and Latin America. From 2012 to 2014 Marina and Ronan attended and graduated the school “Le Lido, Centre des arts du cirque” of Toulouse. In 2016 they created the show “UEIA” with Claudio Martinez, in the program of professional insertion of the school. The company developed their own language made of dance, acrobatics, hand to hand and movements influences by capoeira. In 2017 they invited Edgar Ramos and Diana Bloch to create together the new show Maiador, which is already included in the program of various festivals in Brazil, Latin America and Europe.