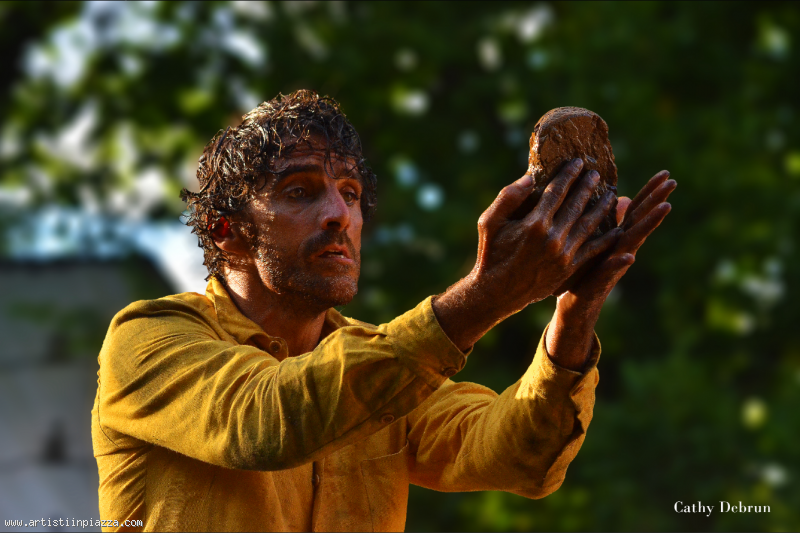 A giant set of scales stands in the centre of the stage...

Mira'T, playing with an exchange of perspectives. From him to himself, both introspective and open to others. From you to him and from him to you. Observing oneself, confronted with one’s own sense of loneliness, making the decision to embark on a journey of self discovery, and transcribing this onto the stage. MiraT, an invitation to observe oneself without complacency or arrogance, but with humour and self derision. In constant pursuit of stability and balance; swinging, spinning and dancing.

Mira'T intends to be an invitation to reflect upon the vulnerable state of the human being, a proposal to ponder on the illusory stability of life, in which every one of us, at any moment, could find ourselves in a borderline situation. On stage, a man and a giant set of scales. Playing with weights and counterbalances, he embarks on a journey in constant pursuit of the limits of equilibrium. This physical journey around the geometry of the structure also represents, symbolically, an interior, emotional journey. It is self observation, whilst at the same time exposing himself to the gaze of others. Addressing one’s own loneliness, and overcoming it by exhibiting it on stage. A symbolic journey that every one of us can relate to, a reflection on the significance of important decision making, life changing decisions. Some may leave their birthplace and venture to unknown lands, others find refuge hiding from society itself. Lost souls, in search of a place of their own, people full of fear and hope, resignation and dreams. Each person with their own interior balance that swings between one feeling and another.

"One of the things that he has learnt during his career as a performing artist is that the length of an act is not limited to the 40 minute duration of the show. The act begins the moment we leave the house to embark on the journey of hundreds or thousands of kilometers, to finally reach the public and create the atmosphere, like a constellation in which we are all united as part of a whole, and in the excitement all emotional barriers are broken. Afterwards, the images and sensations experienced during the show live on in the hearts and minds of everyone present."

- The Structure
​It is a free standing structure not requiring anchorage, a large set of scales in the form of a T, constructed from wood and iron. It is the base and the axis around which the whole show revolves. We are satellites that revolve around ourselves, our lives and inevitably other peoples’ lives. But sometimes some external body interferes with this perpetual pattern of movement, and everything changes course. The structure has a built in mast, a circus technique that he has worked with for the past 15 years. As in his previous creation, he wants to innovate with this apparatus, looking for new ways to interact with it.

- The showground in public spaces - Projection approach
To perform outside in the open-air, in diverse landscapes and situations, fuels the show and requires us to never opt for the safest route, instead allowing space for the unexpected to happen, things that we may have never imagined. Since the beginnings of Circ Panic, Jordi Panareda has always created with open spaces,with public spaces in mind. As in his first solo creation, 'L'home que perdia els botons', he works in a circular format. It is a set up that requires maximum presence; you cannot hide anything. The audience becomes part of the show and everyone can see everything. This creates a very special relationship between performer and public. Although the format is circular, the show is also ment to be performed in theatres.

- Professional Background
Jordi Panareda Pou (Concept, Production and Interpretation) born in 1971 in the Montseny, near Barcelona, he began in the performing art world as a sound and pyrotechnics technician with the Begat Theatre Company. In 2001, he created the company Circ Pànic with Alexa Lecomte. His first show, 'Servei a Domicili', was performed more than 400 times in 10 different countries. The show included disciplines such as mast, tightrope, acrobatics and animal training. Since 2003 Jordi has been studying movement and contemporary dance with Mal Pelo, Tomàs Aragay, Claire Ducreux, Roser López Espinosa and Maria Fields. He also attends various workshops run by Michel Dallaire. In 2005 Circ Pànic created ' La Caravane Passe', a show that toured until 2010 and consolidated the company on the international circuit. 'L'home que perdia els botons', the first solo production of Jordi Panareda, was released in 2011. It gave a new twist to traditional usage of the mast, being pioneer in horizontal mast work. The show has performed more than 200 times in major European festivals. In parallel, Jordi Panareda has been collaborating as an advisor to different circus and dance companies.