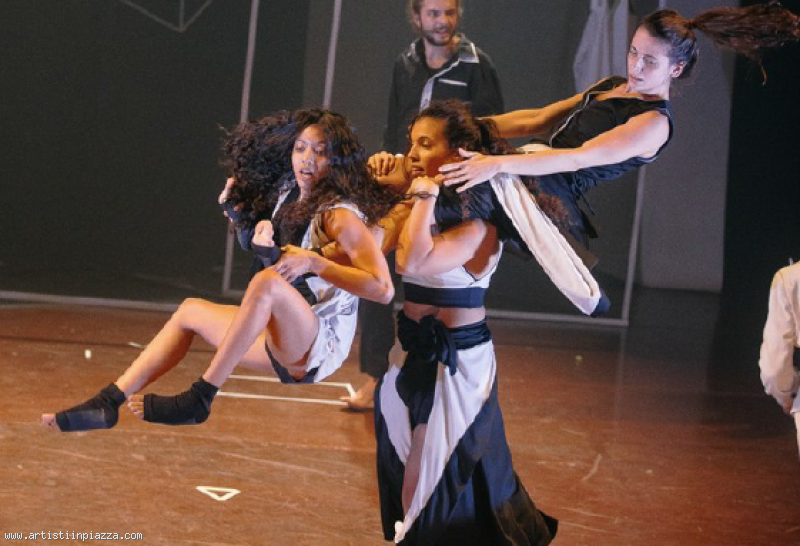 Circo no Ato is a collective of artists created during the professional course at Escola de Circo Social do Crescer e Viver by the acknowledgment of an artistic affinity gained during the creation process of the performance “Um dia de João”. The collective ambitions to incur on the circus scene in Rio de Janeiro and on its short time of existence proposed itself to embrace all acting possibilities, and even invented its own acting spaces. Composed by 12 artists that act in diverse circus techniques, the group has been developing throughout the past three years activities related to creation and circulation of circus performances, through actions related to the decentralization of access to culture in the state and city of Rio de Janeiro. Circo no Ato believes that occupying the city streets as a democratic space for free access to culture, therefore, one of its regular activities is the Cabaré de Rua Circo no Ato, a space for scenic experiment, exchange between artists and democratization of art. The Cabaré also has a fixed version that can be performed at private or public events. The members of the company bring a previous cultural knowledge obtained in areas such as Theater, Dance, Theater Direction, Journalism and Economy, contributing to developing a multiple and plural artistic identity. With his repertoire, Circo no Ato made an extensive circulation in the Federal State of Rio de Janeiro and in the capital, visiting mostly cities with lack of access to culture and neighborhoods outside the downtown and richest areas. Circo no Ato was awarded the Prêmio Carequinha/Funarte in 2013, to circulate their street performance through ten cities in the State of Rio de Janeiro. They also won The Competive Circus Show of FIl in 2014 and Viva a Arte! in 2015, which is a furtherance from Culture Secretary of Rio de Janeiro to create the company’s new performance debuting in 2016.
A Salto Alto – Entre gentilezas e extermínios tells the story of seven people who, having accessed another way of living, undress themselves from their own experiences to dress up another reality. The performance unfolds from this tension between a formal and refined environment and characters that carry in their essence the irreverence of a person who wants to reinvent and resignify life each and every moment. A Salto Alto desecrates Cinderella’s classic fable having as main critique the unrestrained consumerism of our society.
A Salto Alto – Entre gentilezas e extermínios is the third performance from Circo no Ato. It is the result of a long creation process, built throughout 11 months. A Salto Alto went through different stages, divided basically in three residencies: the first one at Central del Circ in Barcelona, where the company participated in an important process of technical and artistic qualification with renowned artists from the European circus scenery; the second and third ones in Rio de Janeiro, at Circo Crescer e Viver for 2 months; and at Escola Nacional de Circo, where this play was accomplished. Result of a collective direction between Circo no Ato and the Italian director Roberto Magro, the performance desecrates the classic Cinderella fable in a play-writing that mixes fantasy, satire and questions the unrestrained search for material assets. The performance still counts with the dancer and performer Gustavo Ciríaco as Direction Collaborator, and the dancer and physical preparer Maíra Maneschy as Stage Manager. The playwright is from the dramatist and theater director Diogo Liberano and the Musical Director is the musician Raquel Coutinho. In 2017, A Salto Alto performed a three months circulation in the summer festivals of Europe. It made about 23 presentations, passing through 16 different cities scattered between Belgium, Italy, Spain and Portugal. In 2018, the show is part of the program "Palco Giratório", of the SESC National (Commerce Social Service), the largest circulation project for scenic arts in Brazil, visiting 14 Brazilian states during eight months of circulation.