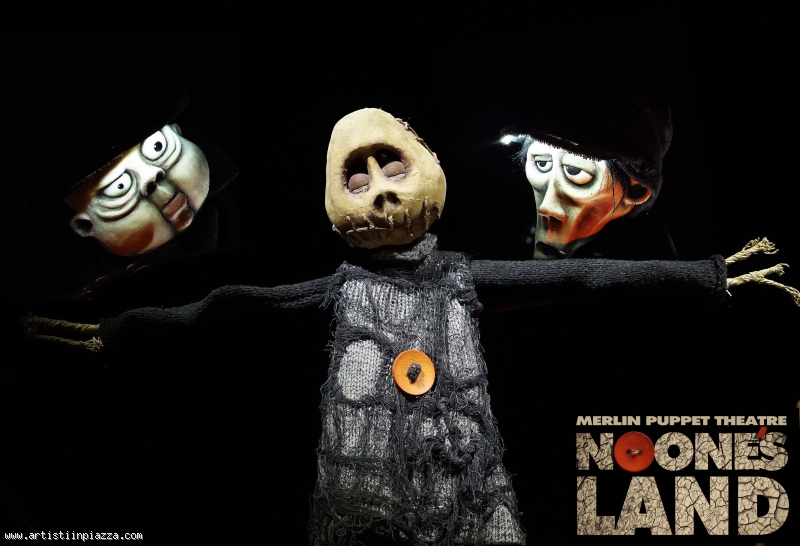 The dream, the creativity, the power of imagination against reality through the eyes of a scarecrow. Of a lonely creature, eternal spiked at the same point, with no horizon and no chance of escape from an environment that has not chosen... 'Noone' of our history is not that different from each one of us, or he is very different.He opens his eyes and discovers the world. He is feeling disappointed. And then he chooses to make it better. He holds it tight and  everything starts from the beginning again...
Noone's Land is that little big piece corresponding to each free man. Is his imaginary world that can not be delimited, sold or bought, can never be taken away, can never be conquered.
"Until at the end I felt...and let them call me crazy...that from nothing comes Paradise..." (Odysseas Elytis)
A visual puppet performance by Merlin Puppet Theatre. Top table puppets and objects in conjunction with the use of various optical media create the visual result.

The Merlin Puppet Theater company was founded in 1995 in Athens, Greece, by Demy Papada and Dimitris Stamou. Since then they’ve run hundreds of performances for young and adult audiences in more than 36 countries all around the world.  They have been awarded 5 times with their both shows “Clowns' Houses” and “Noone's Land”. They’ve participated in festivals, exhibitions, conferences and educational seminars workshops on puppet creation and play. They’ve co-operated with a number of performing artists  such The Tiger Lillies, Dirty Granny Tales and Opera Chaotique. They are members of the Greek Puppet Center of UNIMA. Merlin Puppet Theatre lives and works in Berlin.