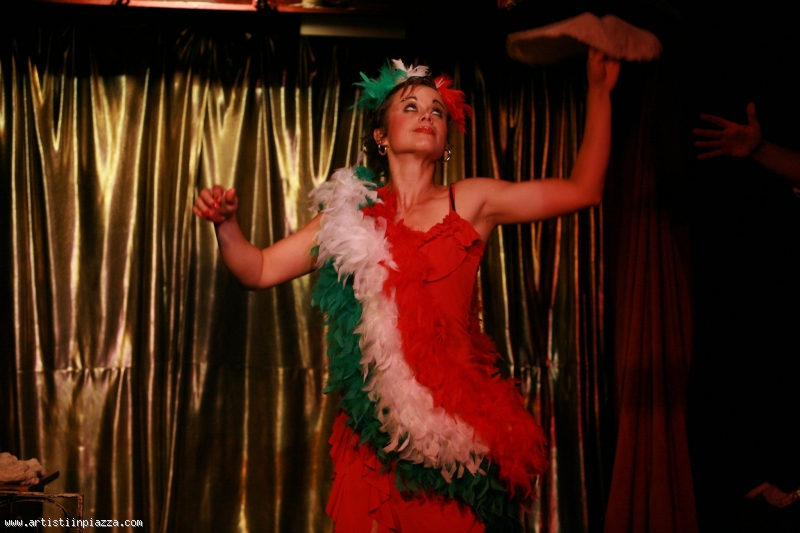 Jessica Arpin is a circus artist, fascinating and adventurous, she travels the world to perfect her art and perform on the streets and in the chapiteaux of the most important international festivals.
Born in Brazil and raised between the United States and Geneva, she began studying circus and theater at a very young age, at the Thèatre-Cirqule School. At the age of 18, she moved to Canada, where she graduated from the École du Cirque de Montréal, a hotbed of worldwide talent. Since then she has performed on stages and squares all over the world with the shows Kalabazi, La Chanteuse, Lex / Pulsion, Miss Margherita. Brazil, Belgium, Canada, Switzerland, Italy, Nuvavut (North Pole), each time in the local language, she grows professionally in the art of "without borders"; between theater, nouveau cirque, clownerie and cabaret. The wind in her voice, the fire in her actions, she acts in the universe of the clown, an entity that is found everywhere and nowhere, without linguistic, social, geographical and political limits. She currently hosts a radio program titled UpSide Down, on Cosmic Fringe Radio.

Miss Margherita is a comedy show of contemporary circus, clowning and acrobatics.
Miss Margherita is an Italian woman with a strong character. She speaks all the languages of the world, with an effervescent Italian accent. Miss Margherita is passionate about pizzas, her pizzas, with flour, yeast, basilo and quality cheeses. Admire her, with her elegant apron and mafia dexterity, hold her magic rolling pin and prepare her dough with her expert hands...but also with her feet, head and whole body!