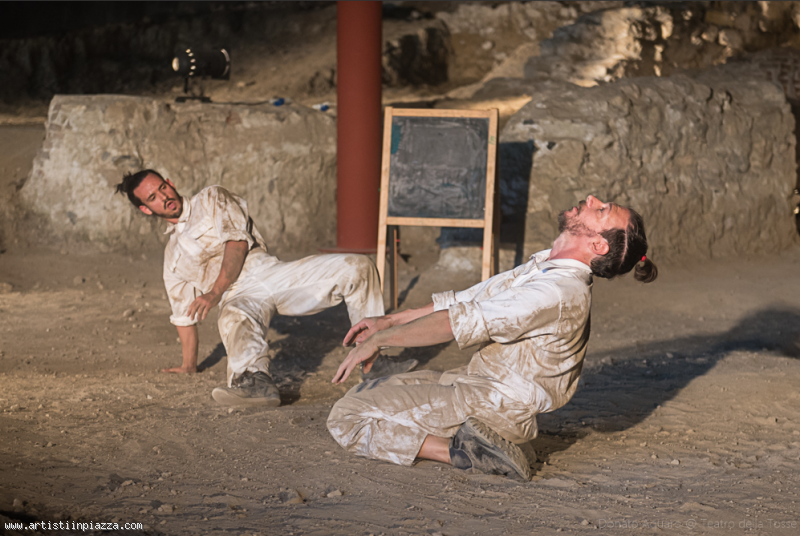 Balletto Civile (Civil Ballet) is an itinerant collective of performers. It comes into existence in 2003 by the will of Michela Lucenti jointly with Emanuele Braga, Maurizio Camilli, Francesco Gabrielli, and Emanuele Serra. In 2016, they won the Hystrio’s “Corpo a Corpo” prize, which confirmed their talent. The collective seeks a ‘broad’, overall scenic language, namely a synergy among theatre, ballet and live singing. They successfully co-operate with Italians and foreign institutions.

Within the twenty-third edition of the Festival, they will present their brand new project Pezzo orbitale – Dedicato a chi cade (Orbital tune – dedicated to whoever falls), a form of extemporaneous performance, a sheer listening activity among voice, body and live music. Likewise, it consists of extemporaneous electronic live musical compositions, performed by Paolo Spaccamonti (guitarist). The  primary ambition of the spectacle is the contact with the other. Throughout the performance, they show up bodies in motion, attentive bodies, conscious of their own movements and of the changing in direction of the others, so as to avoid clashes. It is the encounter that makes this possible. It all makes sense. Standing still in front of a microphone, for instance, gives the artist the time to create a temporary theme song which comply with a certain movement. They fill the space drawing orbits around their bodies, becoming each one both the reference point and the satellite for the others. Mistakes are part of the play: they make the performance unpredictable. The subtitle of the work itself makes it clear to imagine what kind of show is this: “dedicato a chi cade”(dedicated to whoever falls) – the fall is at the heart of unpredictability, which means to create a different performance, a spectacle never seen before.