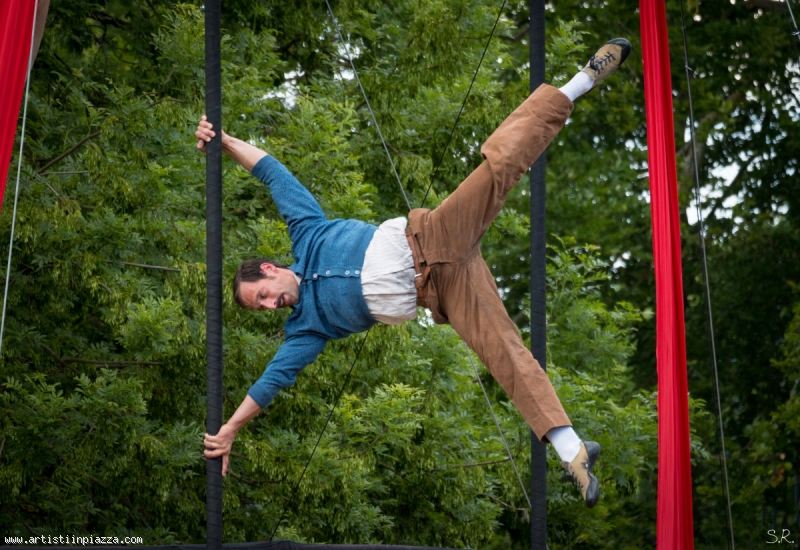 En éventail is an explosive, delirious, engaging and hilarious circus cabaret. The audience is transported into a Broadway-Sur-Marne atmosphere, blending the aesthetics of the great American cabaret with a touch of French camembert, which contrasts a lot, smells a bit but it's not bad! An all-male show in which laces and sequins are swept away by cardboard, sweat and a sense of kitsch; a multifaceted show, with stylish numbers and physical prowess, from acrobatics to magic, from juggling to dancing: an Irish matador who performs on aerial belts, two messed-up knife throwers, an odd moustache doing evolutions to the Chinese pole and a long red-crowned horsehair circling the aerial rope on soul music. An entertainment, only apparently approximate and improvised, with five crazy characters who do their best to avoid the worst and earn a laugh, ready to take any kind of risk for their beloved audience.  The Five Foot Fingers are five artists who met in 2001 during their first professional experience in the young talented nursery Parc Astérix. At that time mustaches were not yet their specialty. This experience allowed them to discover the pleasure of working together, playing together, being together, and eventually they were also fired together. Then destiny took them on different paths, making them grow artistically in an autonomous way until, for their joy, luck led them again to share a great adventure, forming this company together and starting to work on a new show. They use all their skills and abilities in creation, in a highly democratic and collective way, like all their toes together in the same shoe.