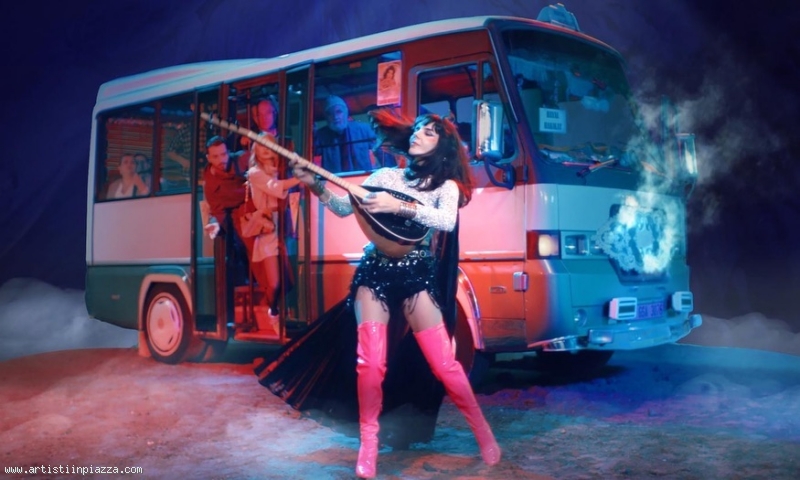 Gaye Su Akyol is a compelling and distinctive young Turkish singer. She was born in Istanbul and since she was a child she moved with her family all over Asia Minor, assimilating styles and genres that characterize the Anatolian musical world. Gaye Su Akyol cannot, therefore, ignore the global scope of Turkey and the city that gave her birth. The exceptional anthropological diversity that characterizes the Turkish world, in fact, provides the musician with the stimulus to paraphrase the Anatolian paradigm, full of ideas and references to human evolution. He studied anthropology at the university and after graduating she worked in painting and began to write songs.

She blends together Turkish and rock influences, and included a powerful plea for press freedom. Yaz Gazeteci Yaz (Write, Journalists, Write) was made famous by veteran folk singer Selda Bağcan, and has become all the more poignant and relevant after recent events in Istanbul, Akyol’s home city.

Her second international release, Istikrarli Hayal Hakikattir (Consistent Fantasy Is Reality) provides a further reminder of her powerfully original approach. Her other influences include Nirvana and Nick Cave, and with help from an impressive guitar band she has created a distinctive folk-rock style in which sturdy bass riffs and percussion underpin distinctively Turkish melodies. To this is added a dash of electronica, and local stringed instruments including the oud, bağlama and cümbüş.

The theme, as she explains in her “artist statement”, is “the dream of pure freedom” and the need to “create a counter-reality in order to challenge organised evil”. Many of the songs are slow, brooding and poetic ballads, with her soulful voice matched against gutsy backing, with the band breaking away for an instrumental workout at the end of Meftunum Sana (Captivated By You) or providing an unexpected flamenco setting for the edgy Şahmeran. It’s an often pained and personal set, with only one song not written by Akyol. Hemşerim Memleket Nire (Where Are You From Mate?) was written by the late Bariş Manço, a massively popular figure in Turkey: his plea for tolerance is one of the highlights of the album. She deserves international success, and she appeared on the stage with personalities of the caliber of Neil Young, LCD Soundsystem, and Deerhunter.

For her performance at this summer’s Womad festival she styled herself like a pop star – with high silver boots, shorts and cape, but then produced a bravely experimental set that fused traditional Turkish and rock influences, and included a powerful plea for press freedom.