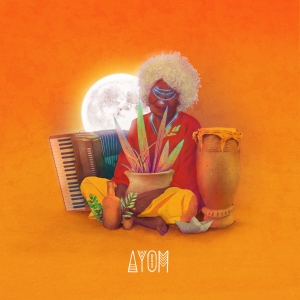 Ayom is the Lady of Music, who lives inside the drum. This strength is the soul of the project: a mix of often unknown rhythms with texts in Portuguese, Spanish, Yoruba, and Kimbundù that tell of loves, encounters and parties. Ayom's repertoire intertwines Brazilian, African, Mediterranean and South American rhythms, but is also influenced by the cosmopolitan energies of Lisbon and Barcelona, ​​where the group's musicians have made their homes. The result is a musical genre that transcends borders: its sound creates bridges between different rhythms such as carimbó, cumbia, baiao, semba, coladeira, funaná, ijexá, guaguanco and many others.

Their debut album, Ayom, was named one of the 10 best records of 2020 by the prestigious English magazine Songlines. It is a collection of songs that point to and borrow popular music from Brazil, Angola and Cape Verde, offering an exciting and spiritual journey across the Atlantic.