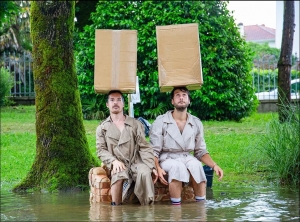 Soralino was born from the encounter between a juggler and an equilibrist, but above all from the kilometers and trips in a van. Caio Sorana and Clément Malin met in Paris at the Académie Fratellini and founded the company in 2015. Their always intimate and always funny duo sees the foundations of their circus in the commitment to risk and balance.

Caio Sorana, Italian-Brazilian, meets juggling at the age of 15, after experimenting with various objects he discovers the clubs, the main object of his research. It uses the body as a creative basis and the object as a pen for choreographic writing. It seeks fluidity, suspension in its relationship to rhythm.

Clément Malin is a specialist in scale acrobatics, his private partner. Born into a family of puppeteers, Clément discovers the living arts in the cradle. He graduated in physical education and joined the Académie Fratellini in 2012 with the aim of broadening his artistic vocabulary. His work marries the energy of street art, the marquee and feeds on a theatrical, musical and corporal practice.

A domestic illustration of Sisyphus' myth, where two characters in raincoats dressed in oversized clothing, play with cartoons, throwing and stacking them on the edge of the catastrophe ...

The show won the "Ici et Demain" festival in Paris in 2015 and the Bronze Medal at the 40th festival del Cirque de Demain 2019.