All the shows
Loading Map....
10 – Saloon
via della Confraternite - Pennabilli 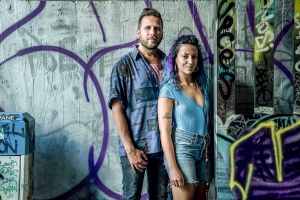 Italian alternative-pop duo, composed by Luca Pignalberi who creates acid blues harmonies and explosive rhythmic pulsations with the drums, and Daiana Mingarelli who follows him with an original vocal timbre ranging from whisper to scratchy treble.

The stage can be almost any place for the two of them – whether on the streets and squares of Rome, in a small club to in Berlin’s Mauerpark. Daiana and Luca create their very own stage – through their presence and their unique division of instruments. This can be seen, among other things, in the playing of the drums. Daiana plays the snare, Luca Hi-Hat and base drum.

Two people, drums, guitar, vocals: there are inevitably thoughts of bands like The Ting Tings, The White Stripes, or The Black Keys, who create a maximum of sound and energy from the smallest possible band formation. It is these three bands – as well as the Belgian singer Selah Sue – who inspire the music of the duo with their varied songs.

Daiana Lou – this is also the combination of different musical styles and different musical vites. While Daiana has a background in reggae and R’n’B, the musical “home“ of Polo instrumentalist Luca is a classical blues education. But she has also inspired the music scene in her adopted home Berlin, where she has been living with small interruptions since 2015 – and especially electronic music.

Just as the two of them don’t allow themselves to be bent musically and pressed into a prefabricated form, it is just as important for the duo to show clear edges with their lyrics. Everyday racism, social inequality and oppression – in many of their songs they deal with socio-political themes that they encountered especially during their time as street musicians. With their music and lyrics, they want to shake people up and sensitise them to the great themes of our time – and entertain their audience at the same time. “We believe that music is a very strong cement that connects us and can make the world a little bit better.“ That’s another reason why humour, along with positive energy, is an elementary part of their artistic work.