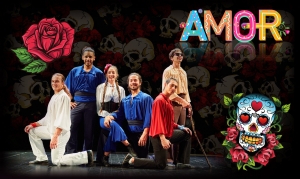 Amor is an acrobatic show, just as acrobatic are the actions that love makes man and women perform. Inspired by the works of Gabriel García Márquez, a group of Cuban artists tell a story with their bodies that encompasses all the facets of this feeling, from the noblest to the darkest. The magical realism of the Colombian Nobel laureate is expressed with a variety of circus techniques (jumps on the ground and with the rope, hand-to-hand, juggling, diabolo, German wheel, swing), each of which symbolically represents a passage of the plot in a real and their own story in pictures.

Amor is based on the mixture of suggestions, artistic forms and different cultures, bringing on stage six acrobats from the Havana Acrobatic Ensemble who grew up at the Circus School of Havana, an offshoot of the most important school of the twentieth century, that of the Moscow State Circus. Unique artists, who combine Soviet rigor with the Latin temperament, capable of mastering different disciplines and dancing and acting skills.

Enveloped in the enchanted atmospheres of the great classics of South American music, the scene changes its meaning before the eyes of the viewer, transforming the setting from familiar to extraordinary. The sets move and change, the artists describe the power of love through the universal struggle between the freedom of the individual and social conventions. Emotions flit in the air together with knives, hourglasses and letters that guard and reveal the destiny of each of us.

Written and directed by Alejandro Plàcido

Amor was staged with the Colombian group Havana Acrobatic Ensemble during the creative residencies at Claps – Brescia and e Teatro Comunale Città di Vicenza.
A world exclusive of the Italian company Mosaico Errante.